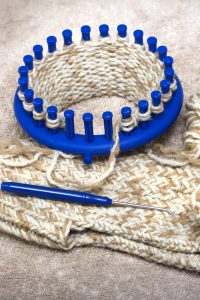 What is the first thing you can think of that’s knitted – that isn’t a Christmas sweater?  Good guess! If you guessed a scarf that is correct.

Scarfs are so common because when first learning to knit, the simple design and shape of a flat scarf is a perfect beginning knitting project.

To get you started, try out loom knitting! It is a simpler form of knitting because instead of starting with the more difficult knitting needles and techniques, it mainly requires only your hands and a small loom hook. I have found that even my kids are able to use a loom kit easily.

There are plenty of loom knitting options to choose from. You can create a flat scarf with a straight loom or a rectangular loom, but that’s not why you’re here. A simple round loom will work just fine for you too as long as you learn some standard loom knitting patterns.

To make a scarf on a round loom, here’s what you will need:

Getting Your Cast-On: Attach Your Yarn to the Loom

To make the scarf wider, I like to use more pegs, usually around 8-9. To make the scarf thinner, use fewer pegs. Keep in mind that once you finish the scarf and remove it from the loom, it will be slightly more narrow. A general rule of thumb I like to follow is to loop up six pegs on each side of the loom for an average width scarf.

Once you get to the last peg, wrap the yarn twice around it so that it faces the direction it came from. After doing this you have now reached the turn, where you will need your yarn hook.

Now wrap the yarn around each peg in a clockwise direction.

Take your loom pick, bringing the bottom loop up over the top loop of yarn to secure it.

Keep repeating this pattern for each loop until you return back to the first peg.

After reaching the first peg, one tip I like to use is to push the yarn down the peg to the halfway point to give yourself some working room. More information on wrap and turn here.

Now that you’ve completed your cast-on, start the first row by completing the turn.

To do this, weave a figure eight on the first two beginning pegs. Then continue on from peg 2 in a counter-clockwise direction just like you did with your first cast-on row.

Upon reaching the far end, you are going to follow the same pattern as your cast-on return row. As a reminder, that means using the loom pick to pull the bottom loop up over the top loop as you circle each peg with the yarn in a clockwise pattern, back to the beginning of the loom.

Congrats! You have finished knitting your first row!

Now you can untie the yarn from the anchor peg.  It won’t come undone anymore.

Going back to where you left off, you will skip the first peg to complete a purl loop.

Keeping your yarn under the loop, use your loom pick to pull the loose yarn under and up through the tight loop on the peg, thus creating a loose loop.

Take the old loop off, and replace it with the new loose loop you just created.

Now repeat that pattern all the way back to the starting peg.

Once you get to the first peg, again you will need to complete a turn. Just like when you knitted your first row, weave a figure 8 on the first two pegs, then continue on from peg 2 all the way across in a counter-clockwise direction.

With the loom pick – pull the bottom yarn up and over the top yarn on each peg, beginning with the first stitch all the way to the last.

Then pull the yarn down about halfway on the peg to give yourself some room for the purl loop once again.

Does it seem like you’re repeating yourself yet? Yes? Good! Then you’re doing it right. It may be hard at first, but I found by repeating the same movements you can quickly learn the necessary steps.

Keep On Knitting On

Now you should be getting into the groove here, as you continue that same pattern for the duration of the project.  Keep an eye out to see how long you want your scarf. I find that sometimes I get so into the groove of knitting, I forget to check the length and end up making a scarf that is far too long.

I prefer an average length scarf that most people will fit, which is around 5 feet, give or take a foot. But of course, that is all up to your preference!

We will be utilizing the modified basic bind-off to finish this scarf with a smooth, even end.

To do this, wrap a loop around peg 2 above the existing loop, pull the bottom loop up over the new loop.  Then take that loop off of peg 2, and put it around the top of peg 1.

Tighten the yarn, then pull the bottom loop up over the top loop again. Take that loop off of peg 1, and place it back on peg 2.  Now here is where the modification happens.

Take the loose yarn, and wrap peg 2 and peg 3, pull the bottom loop over the top loop with the loom pick on both pegs.

Repeat the process from pegs 1 and 2 by taking the loop off of peg 3, placing it above the loop on peg 2.  Then use the loom pick to pull the bottom loop over the top loop.  Take that loop off of peg 2, place it on peg 3.

Every time you move loops from peg to peg, don’t forget to tighten the yarn back up. This will help give the edge a uniform, even look.

Get some scissors, cut off the loose working yarn, about 2 to 3 inches from the loop.

Take your loop off of the round loom and pull the loose yarn through to tighten the corners.

Now the scarf is pretty much done, but you will want to hide the loose yarn by weaving it into the edge of the scarf for a more refined look.

Use the yarn hook to dig under a tight loop, grab the loose yarn with the hook end, and pull it loop by loop until the loose yarn is hidden into the pattern of the loops.

Once it is completely hidden, you’re all done! Congrats on finishing your simple loom knitting project!

Give yourself a pat on the back. Or maybe a hand massage. You have earned it! How long does it take to knit a scarf? Find out here.

I’m a stay at home mom with our two kids. I really enjoy doing crafts with my toddler however, that is typically a challenge with her limited attention span, messiness, and desire to always have clean hands. So, I’m always looking for ways to make crafting an enjoyable experience and fond memory for the both of us.