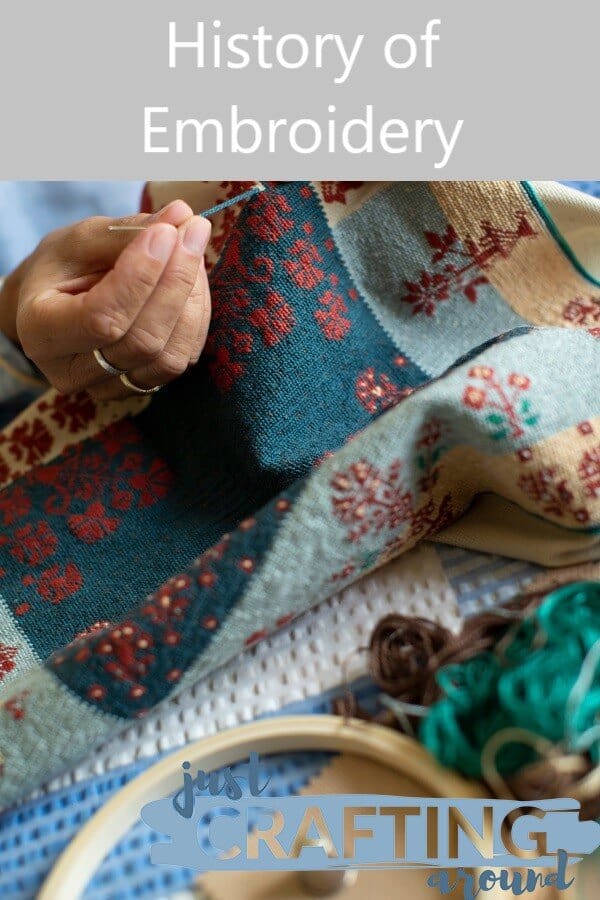 Embroidery is the art of decorating fabric or other materials using thread, beads, yarn, and more materials. Today, different embroidery methods have varying degrees of popularity from one place to another.

But where did it all begin and how did this exquisite art evolve over the years?

In this article, we’ll answer this question by showcasing the curious history of embroidery.

The Origins of Embroidery

There’s been a lot of evidence of people practicing this form of art dating back thousands of years. Of course, there’s no telling which culture was the first to practice embroidery, but many scholars believe it started in the Orient.

In the beginning, the art of embroidery developed from traditional stitching techniques. At first, stitches were merely used to fix and patch up clothes, which later led to the creation of numerous stitching methods.

Later, primitive humans mastered the arts of stitching and making clothes. As a result, they eventually started practicing embroidery.

Now, let’s find out more about the evidence of embroidery in several cultures.

A lot of historians believe that embroidery dates back to 30,000 BC, or the Cro-Magnon days. This makes it one of the most ancient arts practiced by humans.

Archaeologists have found fossilized remains of decorated clothes and boots belonging to that period. Of course, this discovery backs up the claim that embroidery has existed for a very long time.

Also, scientists discovered drilled shells embroidered with decorative designs in Siberia. The experts claimed that these impressive artifacts date back to 5,000-6,000 BC.

In fact, if you take a look at paintings of Ancient China, you’ll notice that they show plenty of embroidered clothing. These clothes were decorated with various materials such as:

Scholars believe that embroidery was practiced in China since 3,500 BC.

Now, let’s not forget how Middle Eastern history is rich in evidence of embroidery as well. It appeared in paintings and vases that depicted people wearing embroidered clothes.

Plus, Ancient Egyptians have left a variety of artifacts that showcased their craftsmanship in embroidery. Archaeologists found plenty of decorative needlework on the contents of the tomb of King Tutankhamun. These treasures date back to the second millennium BC.

Furthermore, the Vikings had their fair share of embroidery creations. Yet, their discovery of this art form was rather late compared to the rest of the world.

You can clearly see how the Vikings were influenced by other parts of Europe when it comes to their embroidery techniques.

For instance, some pieces discovered in Denmark showed an uncanny similarity to the methods that the Anglo-Saxons used. These pieces were made using chain stitch, stem stitch, and couching stitch.

Other findings in Sweden included the use of silver thread in embroidery, which was rather popular in Ukraine and Russia. Some scholars even believe that the Vikings learned this technique from the Byzantine empire.

Many other cultures practiced this fine art as well, including Persia and Japan.

The Evolution of Embroidery Uses and Techniques

In the 1100s, people used small seed pearls to decorate religious items. These decorations were often stitched on vellum. After that, the embroidery wasn’t only limited to religion-related clothing or fabrics.

In the period between 1200 and 1300, all types of clothing were embroidered, including male costumes. By the year 1500 AD, the embroidery was considered a sign of luxury and wealth in almost all cultures.

Later, between 1500 and 1700, the embroidery was even more popular as people included it in the making of many items. Decorative thread and beads were found on home furnishings, sheets, baskets, court dress, and more.

During that time, having embroidered items or clothes meant you were wealthy, and this wasn’t just in one region. This was a common assumption in many cultures including:

In Medieval England, there were professional workshops dedicated to countless techniques of embroidery. The pieces produced by these workshops were famous all over Europe, and they were called ‘English work.’

In other places such as Vietnam, Mexico, or Eastern Europe, the embroidery was a traditional art passed on from one generation to another.

Of course, in the 1800s, free-hand embroidery started to fall short due to the introduction of machine work. Then, canvas thread embroidery had some short-lived fame and was soon replaced by counted cross stitch.

As more new needlework stitches came to the surface, free-hand embroidery almost ceased to exist. Instead, bead embroidery became more famous, which is still the case until this day.

Embroidery Materials Over the Years

Ancient humans used a broad spectrum of materials to decorate their clothes and other items. It all began when they discovered that they can tie two pieces of animal skin together to create a joined surface.

Then, the art of decorating pieces of clothing became a thing, instead of using stitches only to fix clothes. Throughout history, many materials were used in this regard, including:

Now, the embroidery thread is manufactured from cotton, rayon, wool, linen, and silk. A lot of embroidery techniques also depend on silk ribbons to create floral patterns.

Today, embroidery is done by machines. However, it’s still practiced by artisans in some places in the world, but it’s less common than it used to be. These creations are usually expensive because they’re handmade.

Of course, a lot of people do embroidery as a hobby, creating their own designs to decorate their homes or sell their work.

Embroidery has started to rise in popularity over the past few years, with many products on the market to make your job easier.

We hope that, by reading a bit into the history of embroidery, you’ll find your way to this beloved craft. It can be soothing for the nerves, not to mention that working on art projects can be therapeutic.