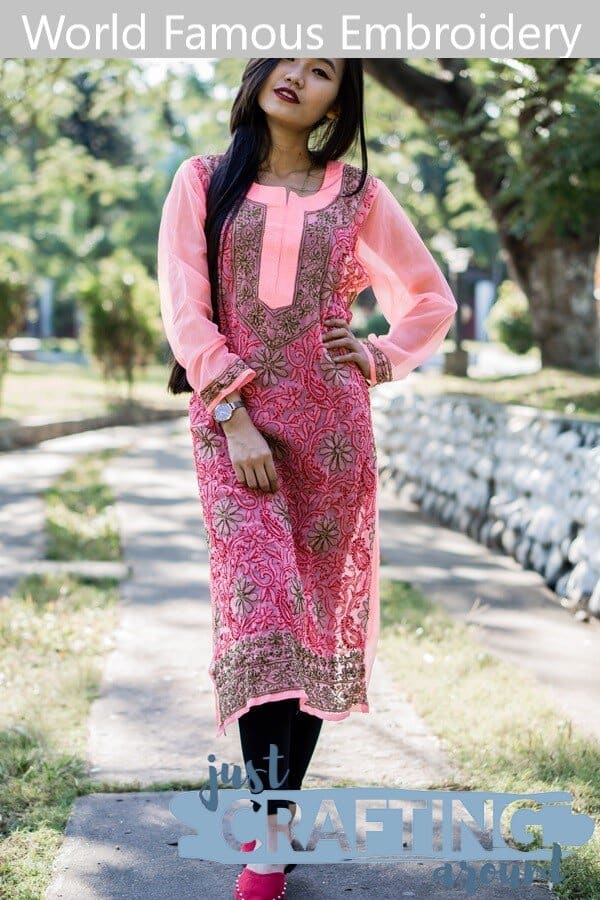 Embroidery isn’t just about creating intricate patterns and pretty designs. It’s a form of art that speaks of history and culture just by looking at it.

The world of needlework is fascinating, and what better way to get into it than showcasing famous embroidery from across the globe.

Once you explore our list of famous embroidery, don’t be surprised if you find yourself eager to learn much more about cultural embroidery from even more regions.

Chikankari is both a delicate and complex style of embroidery from the land of Tehzeeb and Nazaquat, Lucknow. Supposedly, it’s been introduced by Nur Jehan, the wife of Mughal emperor Jahangir.

While it’s true that Chinkankari thrived during the rule of the Mughals, there are references to the art that date back as early as the 3rd century BC where Megasthenes talks about the use of flowered muslins by Indians.

To create a chikan piece, patterns are block printed on it first. Then, craftsmen embroider stitches following the printed pattern. After the embroidery is done, the finished piece is washed to remove any traces of the prints.

Chikankari began as a variation of white-on-white embroidery, but today it uses a wide range of fabrics and colors. From white thread embroidered on refreshing pastels all the way to bright-colored silk threads, Chikankari has evolved into an art form for embroidery lovers with a taste for the finer styles.

Brazilian embroidery is a type of surface embroidery that uses rayon as opposed to cotton or wool. It’s called “Brazilian” because using high-sheen rayon thread in embroidery first came popular in Brazil, where rayon was widely produced.

Brazilian embroidery patterns typically feature flowers formed using both knotted and cast on stitches. Thanks to its smoothness, rayon thread makes it easier for craftsmen to pull the needle through the wrapped stitches, for example, bullion stitches.

With a straight shaft and an eye no wider than the shaft, Milliners needles are primarily used for the wrapped stitches that are a staple in Brazilian embroidery.

Granted, many of these stitches are commonly found in other forms of embroidery, but the technique used to create them is what makes them unique in Brazilian embroidery. The difference lies in the method of manufacturing the rayon thread.

Cotton thread, for instance, uses an S twist when the fiber plies are merged into a strand. However, Rayon thread uses a Z twist where one variation of twist turns the fiber plies clockwise and the other does it counterclockwise.

When creating the knots of Brazilian embroidery, the embroiderer has to wrap the thread onto the needle in a direction opposite from that used in other embroidery styles. Otherwise, the fibers of the thread will unwind, making the end stitches and knots look unattractive.

The beauty of the Kantha embroidery can be summed up in its simplicity. This style of embroidery is among those traditionally practiced in Bengal and Odisha, especially by the hands of rural women.

Back in the day, Kantha was done on soft dhotis and sarees, with a simple stitch running along the edges. Interestingly, the thread used to make that stitch was drawn from the border threads of the same cloth.

The Kantha embroidery is characterized by themes of birds, animals, flowers, and everyday activities in a running stitch format with short gaps. You can see Kantha nowadays adorning sarees, dresses, bed covers, upholstery, wall hangings, and a lot more.

A form of Japanese folk embroidery, Sashiko uses the basic running stitch to create a patterned background. The Japanese word Sashiko translates into “little stabs”, which is an indication to the small stitches used in this type of needlework.

Sashiko originally served as a type of darning to repair or add strength to torn or worn parts of clothing, or to produce insulated double-layer coats. However, this combination of beauty and durability made it become a form of art, not just a functional stitch.

Very popular with quilters, the inspiration for traditional sashiko designs mostly comes from nature, particularly the shapes of clouds, rippling water or waves, flowers, and leaves. Designs can also be geometric featuring interlocking lines (straight or curved). stars, squares, triangles, and circles in arranged in a repeating pattern.

Punjab isn’t only famous for the delicious Sarson da saag and Makki di roti. In the embroidery world, Punjab’s Phulkari is definitely what first comes to mind when you think of this state. Phulkari means floral work, so Phulkari needlework is the embroidery of flower motifs on fabrics. As unique as this embroidery style is, it was traditionally practiced by women of the house to pass time.

The stitches of Phulkari are embroidered on the reverse side of the cloth, allowing the design to take shape in the front. The choice of fabric here is usually a hand-spun or naturally dyed khadi cloth.

What makes Phulkari stand out the most is the contrast of bright colors on a lighter colored fabric.

Originating from the land of Persia, Zardozi is an ancient art of embroidering gold and silver threads on a fabric. A type of needlework that was once exclusive to embellish royal garments, Zardozi came into the spotlight in the 17th century during the rule of Mughal emperor Akbar.

Traditional Zardozi work uses gold and silver threads, as well as pearls and precious stones. Also, the choice of fabrics had to be royal, which explains how plush velvets and rich silks complemented this luxurious embroidery.

Today’s Zardozi work, on the other hand, uses a combination of copper wire with silver or gold polish and silk threads. This hasn’t taken away from the extravagant feel of the style, just made it more accessible.

There you have it, 6 famous embroidery styles from all over the world. Which one is your favorite? Be sure to also check out the history of embroidery and how the technology have evolved.