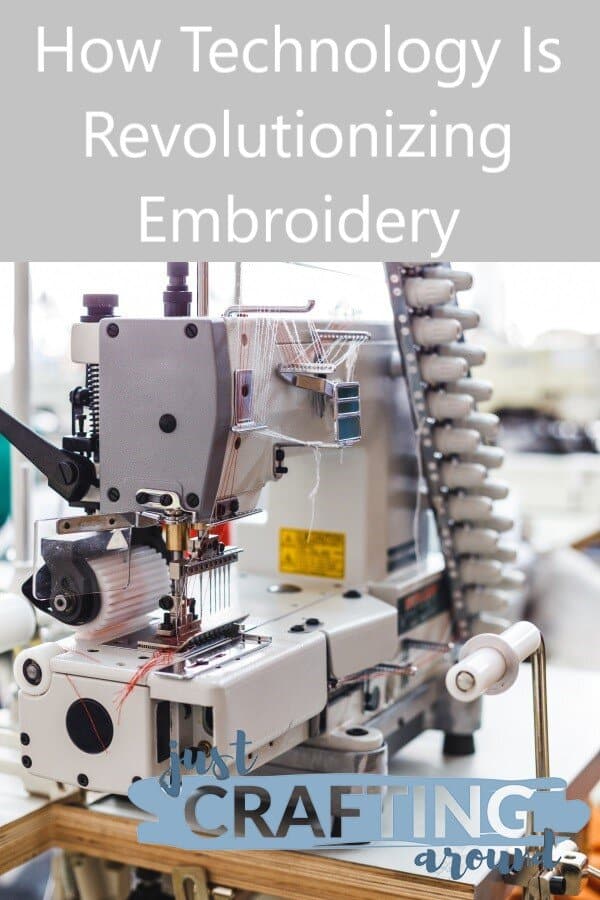 Embroidery is an age-old art form that has become a mainstream hobby, not to mention a highly successful business. Machine embroidery is used to create beautiful designs on everything, from clothing to quilts and pillows to home decor.

There are many embroidery machines to choose from, each with different features that control the pattern, thread, and needles. Modern machines boast of embroidery technology that makes them capable of doing so much more than their predecessors.

Keep reading to find out more about this wonderful form of needle artwork.

Embroidery is the ancient form of needlework. It’s been used all over the world for thousands of years. This ornamental art form has many uses, including communicative and decorative purposes. Plus, it adds texture, dimension, and a burst of color to fabric and textiles.

Embroidery machines work the same way as a basic sewing machine. There are an upper thread and a lower one that run along both sides of the fabric to lock the stitches together. These stitches are made when the upper and lower threads wind over each other.

The Evolution of Embroidery Technology

Let’s go back to the beginning of the 19th century to find out how this fascinating craft originated.

Embroidery began as an art form in London in the early 1800s. Done completely by hand, it was used to adorn the clothing of nobility and the royal family. It was also taught to young girls to show their position in the social hierarchy.

Machine embroidery first appeared in the middle of the 19th century. It started with the hand embroidery machine, invented by Josue Heilmann in Mulhouse, France. This was over 20 years before Isaac Singer patented his first sewing machine in 1846.

Heilmann’s machine consisted of a frame that held up the fabric, a needle assembly, and a hand crank to work the needle. The operator had to guide the needle along the pattern by moving the fabric to meet the needle.

This design allowed embroiders to stitch in any direction. It took a lot of work and effort, but it was the beginning of developing the embroidery machines we know today.

Developments in the Embroidery Machine

Soon after, the first multi-head embroidery machine was developed by the Singer Sewing Company in 1911. It allowed users to make more than one piece of work at a time. But they didn’t really catch on until the 1950s as a result of post-war prosperity that gave embroidery equipment a much-needed push.

The Appearance of Computer Technology

Founded in 1972, Melco developed the first embroidery sample head and the first digitizing system for embroidery machines. A little less than 20 years after it was founded, Melco managed to create a full-service company for the embroidery industry called Accessory Resource Corporation (ARC) — this provided everything needed for embroidery, such as needles, threads, equipment accessories, and even embroidery designs.

It only took a decade for computerized machine embroidery to become widely popular, making this art readily available for commercial and personal use. It also made the overall process more efficient and enjoyable.

Building on this innovation, Melco introduced a bunch of new developments. They incorporated more needles and attachments per head. The machine’s motor also got an upgrade and became faster and more powerful.

Another breakthrough was the inclusion of laser cutting technology into embroidery machines. They allowed for more precise and accurate cutting than ever before.

Wilcom first began in 1979 with a vision for automating the embroidery industry. A few years later, it introduced the first-ever graphic embroidery design system that could be operated on a microcomputer.

Now, Wilcom is based in Sydney, Australia, with hundreds of offices in over 100 countries. It’s managed to build a community of embroidery fans of more than 250,000 licensed customers.

Embroidery technology is now popping up in more and more machines. From efficient hardware to software packages that are designed solely for embroidery machines, this technology is revolutionizing the entire industry.

One innovative feature is lubrication. With previous machines, lubrication was time-consuming and tedious. Newer machines, however, are equipped with sealed bearings and belts that don’t need to be oiled! That doesn’t just save time, but it makes the entire process much more pleasant.

To make things even more impressive, newer machines are built to be less noisy. They’re also capable of handling more accessories and attachments.

Below are a few other embroidery technology innovations that are revolutionizing the industry.

Developed by Melco, the EMT16 is a recent upgrade to their previous embroidery machine. The new and improved machine provides the benefit of having embroidery heads that can be started or stopped independently.

Previous models had to be completely shut down to replace just one bobbin. This new design makes switching bobbins easy and efficient.

Another great feature of the EMT16 is the Acti-Feed thread control system. This system monitors the thread feed and tension automatically. Compared with standard multi-head machines, the EMT16 boosts productivity by 50%

For added convenience, Embroline allows machines to use a single reel of thread for every embroidery head. This feature eliminates the need to keep a large stock of threads, which can make the work feel bulky and unwieldy.

This cutting-edge attachment also does away with the need to constantly rethread the machine. It works to enhance and perfect the quality of the embroidery.

Barudan introduced the e4.1 embroidery machine that comes with state-of-the-art attachments for beads and sequins. These attachments have rotary heads that can do cording and chaining. The e4.1 has proven to be an innovative machine that’s capable of answering the renewed demand for hand-design techniques.

Embroidery technology is moving faster than ever to bring great changes to the industry. With innovative hardware and software features, this creative artwork has no limits.

From designing clothing to accessories, home decor to linens, new machines are making it easier to dream up unique designs and produce them with speed and flawless efficiency.