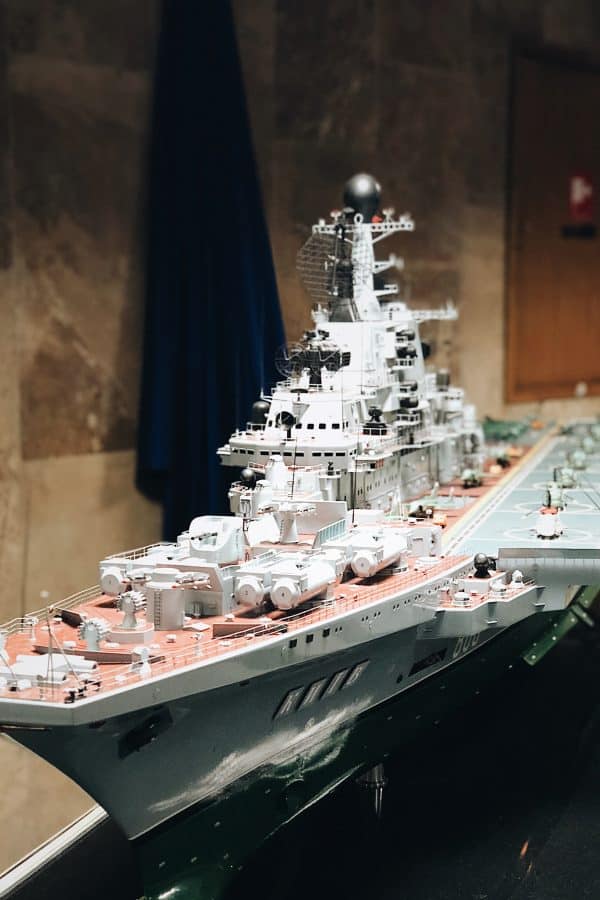 A model kit is no fun unless it has an exciting background story, right?

Building battleship kits isn’t only enjoyable, but it also allows you to observe closely some of the most muscular sea vessels of mankind.

While you can see a plane up close, ride a train, and own a car, battleships are hard to come by in the modern era. Buying a model kit gives you the closest thing to the real legendary warships.

If you want to experience building these awe-inspiring pieces of naval history, get yourself one of the kits listed below. I compiled the best model battleship kits on the market.

The Japanese Yamato battleship is one of World War II’s greatest battleships, although it now lays sunk after a failed struggle for Okinawa. Tamiya beautifully honored the Japanese masterpiece in this well-made model kit.

The kit features the ship in her final form, right before heading to Okinawa for the battle. The pieces replicate the real ship wonderfully, including the armor belts and the bow’s flare along the Yamato’s sides. There are the main turrets, secondary gun turrets, and anti-aircraft armaments, as well.

Not only that, but you also receive radars, cranes, and rangefinders, looking precisely like the real ones. Even the imperial chrysanthemum crest is included, although it’s too tiny to notice.

The boat comes in a 1/700 scale, but the details are pretty accurate and visible, giving you an impression of how big the real thing was. The pieces are a bit too small for some users, but that only makes them more challenging and more fun to build.

Along with the kit’s main parts, you receive some extra plastic replacements in case you lose anything. You also get two weight rods that go into the model’s center. They make the boat more sturdy and stable.

Some users reported they would’ve preferred a full hull rather than the underwater one. However, some other users would prefer it underwater for a waterslide display.

The battleship Bismarck remains a source of pride to the Germans until this day. Decades after its tragic sinking in the Atlantic, its battles are still as awe-inspiring as ever, being the first full-scale battleship the German navy made after World War I.

Not only that, but it’s also one of the largest battleships the European country ever built and the largest battleship in World War II. The actual Bismarck is almost the size of three football courts put together. Luckily for you, Revell made it into a model kit with extreme attention to detail.

For a relatively affordable price, you receive 295 plastic parts, waterslide decals, and a display stand to help you show off your ship after you finish it.

The plastic parts include tenders, derricks with booms, moving gun turrets, and Arado 196 seaplanes. You’ll need paint and glue to finish the ship, and they’re not included in the purchase.

The ship’s molding is excellent, with no flash. However, some users reported they received their kits with missing parts.

The USS Missouri is rightfully one of the most celebrated battleships of the modern era. If you haven’t heard of it before, there’s a high chance you’ve been ditching your World War II studies.

The Missouri, or Mighty Mo, as some may call it, was the forefront of American military engagements in the Korean War, the Gulf War, and World War II. It came out of its battles barely scratched, and its deck witnessed the end of World War II when the Instruments of Surrender were signed on board.

But let’s put the real talk aside and look at Revell’s model kit. It’s a 1:1200 scale model, with two Sikorsky helicopters and two SC-1 seaplanes. You’ll need glue and paint to finish it, which you’ll have to buy separately.

Some users reported it’s smaller than they expect. However, seeing its real dimensions and its scale, you’d expect a small model. That doesn’t make it any less fun to make, though.

The New Jersey BB-62 is best known as the only battleship to participate in the Vietnamese war. Following its commission in 1943, it got decommissioned three times, in 1948, 1957, and one last time in 1991. The battleship now serves as a museum at Camden, New Jersey.

If you want to experience the building of the BB-62, you won’t find a better kit than this Tamiya. The updated kit now comes with Mk.37 gun directors, DP guns, MK.48 rangefinder, and MK.38 direction finder. Additionally, it includes highly detailed Harpoon and Tomahawk missile launchers.

The level of detail is uncanny, presenting a final result that looks precisely like the real thing. Despite that, the assembly isn’t as challenging as you’d think. It’s easy enough for skilled builders, and it gives you enough time to focus on the painting process.

Upon purchase, you receive a reference history booklet covering the ship’s background and battles. You also get printed flag sheets, hull marking decals, and a color profile.

The company took extra care of fine details; they ship a nylon wire spool with the kit for the rigging. Plus, the base can either be screwed or glued onto the ship, according to your preference.

If you intend to use the New Jersey for decoration purposes, you’ll have to find a nice tall shelf. The final result measures nearly 2 feet long.

The Tamiya is a bit costly, but it’s worth every dollar with its fine details and sturdy construction.

The British Queen Elizabeth HMS battleship is one of the lucky ones in this list that ended their journeys decommissioned, not scuttled. When it was first commissioned in 1915, it was a huge leap in technology for its age. It survived all its battles with all the bombing, ramming, and shellfire, before decommissioning one last time in 1948.

The model kit from Academy features 200 plastic pieces, requiring some skill and care for details to assemble. It comes with a sleek wooden base for display that screws onto the ship. The cut lines are molded into the hull insides, so you can create a waterline display without the base if you want to.

The kit includes photo-etched parts, but it doesn’t have paint and glue. You’ll have to buy them separately, like most kits on the market. You’ll get an instruction manual, but it’s mostly made of photographs with no explanatory text.

The kit comes with plenty of pieces that make for impressive details in the finished model. For instance, you’ll get gun bags for both main and secondary armaments, and they’re molded on the barrels to give a lifelike appearance. Additionally, you receive the bollards separated into posts and bases.

It’s worth noting here that real bollards are cast as single units. So, including them as separated pieces in the kit is odd, but it’s no big deal.

In my opinion, the Academy Queen Elizabeth kit is ideal for medium-level builders looking for budget-friendly options. Skilled builders may land themselves better options like the ones above.

If you’re on a tight budget, this model kit of the iconic Japanese Yamato may be the one for you. It features the same ship as the Tamiya Kit, except that it has a full hull instead of an underwater one.

Despite its affordable price, this kit comes with well-constructed steel sheets, and it doesn’t need glue or solder to build. The pieces attach to each other through tabs and holes, and there are illustrated instructions to make the task easier for you.

I recommend using tweezers to detach the pieces from the steel sheets. Out of experience, extracting them isn’t as easy as it looks! The tweezers will also help you twist and bend the needed tabs for assembly.

If you’re an experienced builder and built a Yamato kit before, you may notice some differences from this kit. Nearly all the kits for this battleship are different from each other, and the reason is simple. After the ship sank, its studies, original plans, and models were all destroyed. The only reference for its original shape is photos, which are mostly black and white.

The final result of the Iconx Yamato looks as sleek as ever, thanks to the steel finish. You can display it on your desk or shelf after you’re done building it.

If I were to pick only one battleship of the list above, I’d go for the Revell Germany USS Missouri BB-63 without a second thought. Aside from Mighty Mo’s interesting history that makes building it all the more fun, the kit is very well-made. It includes all the details of the real ship, and it’s a pleasure to build. Check out model tugboat kits and wooden model ship kits