Where would we be as crafters and sewers without a good pair of scissors to cut out designs, trim excess material, or just help us get into some awkward packaging? The thing is that many of us are making do with a good pair of all-purpose scissors when we could notice a difference in our work with a great pair of crafting scissors. In this guide, you will find a series of the best craft scissors in a range of styles to help you get better results. Before that, let’s learn more about what styles of crafting scissors are out there and what to look for when choosing a product. 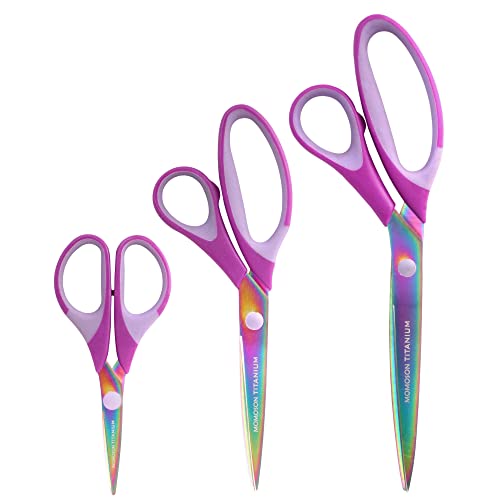 A set of scissors such as this is a great idea if you have various craft projects in mind. The set includes 10 inch dress-making scissors, 8.5 inch craft scissors, and 5.5 inch embroidery scissors. The three pairs match nicely with their purple handles. While some dislike the rainbow blade, most users can’t fault the sharpness they offer and find the handles to be nice and comfortable. There are other color options and not all have the rainbow blade. The all-purpose scissors seem to be worth the cost on their own. 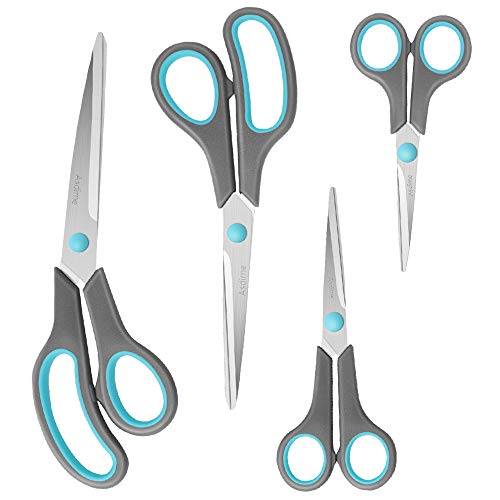 This is another set where you get a selection of scissors for different needs. The craft and embroidery scissors are pretty much the same in length and style. The dress-making scissors are longer at 9.6 inches and there is an extra pair of craft scissors at 6.4 inches. I like the simplicity of these as functional scissors for around the home and their semi-soft grip. One reviewer says “I like them for whatever”, which sums it up nicely. Some say they could be more precise with fabric, but that is where a better pair of sewing scissors helps. 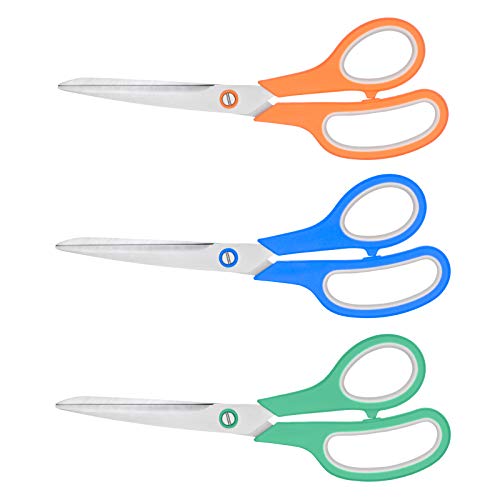 As I mentioned before, it is possible to get left-handed scissors and that is precisely what is on offer here. These scissors aren’t anything special in terms of these features or performance. You get three pieces with different colored handles and a semi-soft grip for comfort. They are all 8 inch scissors with standard blades. Feedback is mixed, but be aware that some people have judged these from photos alone and brought down the rating. Others that tried them have no problem with them.

The Best Craft Scissors for Sewing 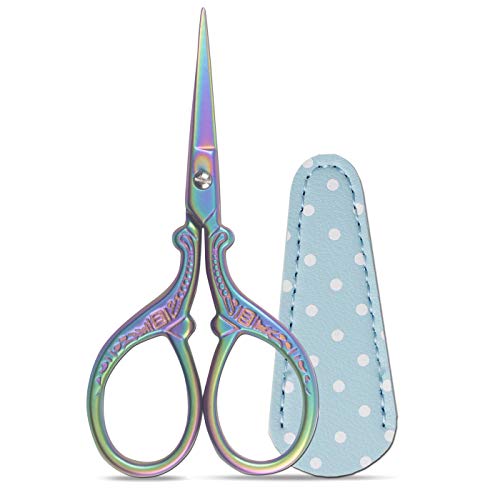 If you are all about embroidery rather than dress-making, a little pair of embroidery scissors like this 3.6 inch product could be a good choice. There is a fine point to the blade for precision work and large handles to make them easier to hold. I love that you get a little leather cover for safety too, although the cover is the same no matter what design you pick. Users love these little scissors for odd jobs and they are a great affordable tool. 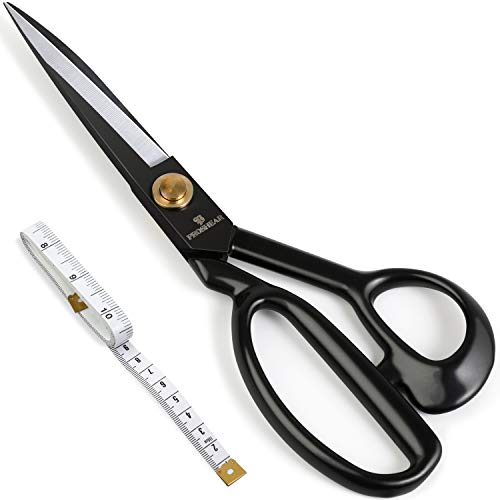 For a completely different sort of sewing project, you might get good use out of these heavy-duty tailoring sheers. These 10 inch fabric scissors have a strong pointed blade for better cuts. They seem to be reliable on most projects, although some users have struggled when using these with denim and other thicker materials. I choose this one because you get some extra in the box. Who can say no to a spare measuring tape or seam ripper?

The Best Craft Scissors for Paper 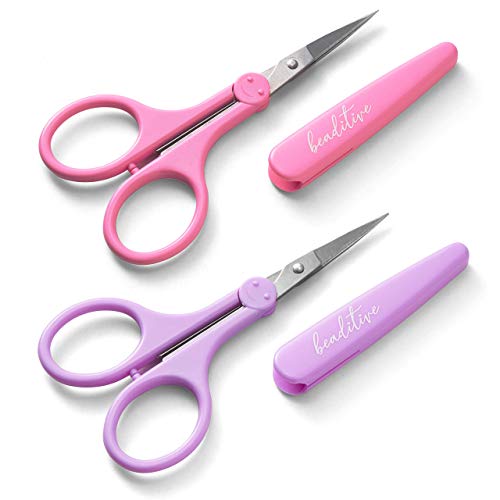 These next scissors are also small and pointed like the embroidery scissors. However, these ones are better suited for dealing with paper. The fine tip lets you get a more precise cut when cutting out shapes and lettering for scrapbooking and other crafts. I like that not only are there two of these scissors – one pink and one purple – they have matching protective covers. That’s a lot for your money. The only concern is that they don’t feel very strong and users worry about their longevity. 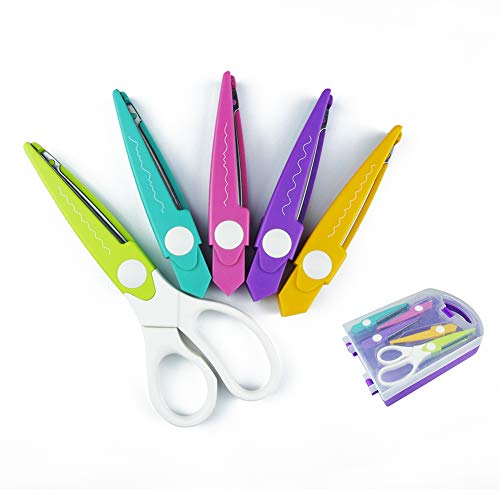 There are lots of products out there where you can add a decorative edge to paper for interesting effects when scrapbooking. This set jumped out to me because you get one body with the handles and then a series of detachable blades in different colors. This allows for an interesting pattern without too many scissors taking up space in your storage box. All the elements come in a nice case too. Just be aware that there are mixed comments on the ease of use and stability of the blades on the handles.

The Best Craft Scissors for Kids 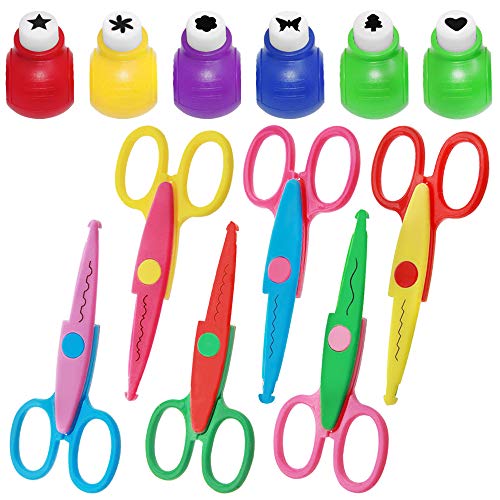 Next, we have something a little bit different. These kids’ scissors are a more child-friendly version of the scissors for decorative effects. They are plastic, blunt, and come in a great range of colors. While the scissors may be flimsy and temperamental compared to adult versions, they are a good introduction for kids. You also get a bonus feature here with the set of craft punches. These punch shapes into the paper for an extra effect and add value to an already affordable kit. 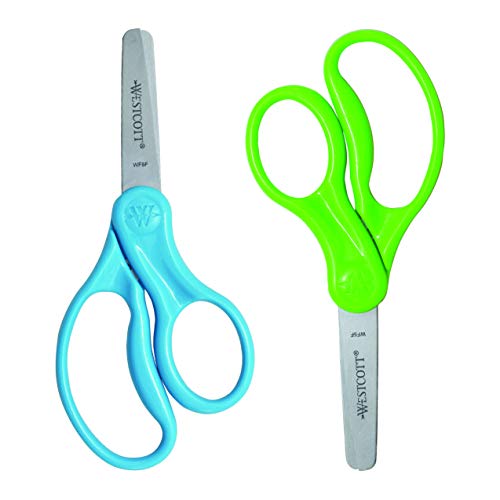 There isn’t much to say about these final scissors because of their basic functionality. There are blunt blades for safety and brightly colored plastic handles. The ergonomics are good, however, and I chose these because you get one pair for right-handed kids and one for left-handed kids. It is nice to see both groups catered for so kids can build confidence at an early age.

Can you use Regular Scissors to Cut Fabric?

You may wonder why you can’t just use a normal pair of scissors to cut your fabric rather than buy something special. It all comes down to the shape and sharpness of the blade. Fabric scissors need a sharp blade with a sharp angle to make a clean cut. Other scissors may be too blunt, leading to frayed or misshapen cuts. Each craft requires a different approach and it helps to get the right type of scissors for your project.

What Types of Crafting Scissors are There?

What if you Aren’t Right-handed?

A common problem encountered by those that are left-handed is that scissors aren’t comfortable and get the precise cuts that you want. Thankfully, some companies offer left-handed versions of their products or that go for ambidextrous designs. This could make things a lot easier.

What to Look Out for When Choosing the Best Crafting Scissors

1) That they cut your chosen material effectively

This should go without saying really. But, you would be surprised at how many scissors there are out there that aren’t sharp enough to get a clean cut and a neat edge. This might be acceptable with a childrens pair that need to be safer, but not for adult scissors. So, make sure to read user reviews.

2) That they are going to last for a while

Again, kids’ scissors could be a bit flimsier because they are typically cheap and plastic. But, a good pair of crafting scissors should have a strong blade and a secure hinge.

3) That they are comfortable for repeated use

Comfort doesn’t just mean finding a pair that is suitable for those that are left-handed, or that are ambidextrous. The holes for your fingers and thumb need to be big enough so that the plastic or metal doesn’t dig in and trap make your digits go numb. Some softer material here helps.

Finally, consider getting a multipack of scissors instead of a single pair. A multipack means that you can have different pairs in different rooms. Or, perhaps you want to keep one in your sewing bag to take to classes or social situations. There is also the risk that someone else in the household will walk off with a pair and repurpose them for the kitchen, garage, or something else.

Choosing the Best Craft Scissors for your Next Project

My aim here was to show you a range of options in different categories for a better idea of the market. There may be something here where you are sure that it is perfect for your chosen craft – such as the smaller embroidery scissors, scissors for decorative edges, or fabric sheers. Or, you may feel that you need a bit of everything and are better off with a set. Whichever route you take, don’t forget to go for a quality item that suits its purpose well.

I’m a stay at home mom with our two kids. I really enjoy doing crafts with my kids however, that is typically a challenge with how limited their attention span can be and how messy it gets. So, I’m always looking for ways to make crafting an enjoyable experience and creating fond memory for all of us.